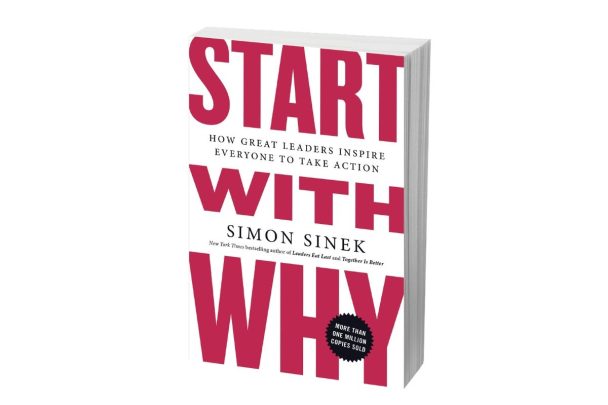 Book Review: Simon Sinek in ‘Start With Why’ Says Purpose Trumps All

A quote from the book will catch any entrepreneur’s eye.

“There are only two ways to influence human behaviour: you can manipulate it, or you can inspire it.”

After all, selling is about influencing human behaviour. But Sinek posits that although companies adopt manipulation and the tactic usually works, it is generally short-lived. Inspiration, on the other hand, makes for a loyal customer base and is the more sustainable alternative.

A bestseller before entrepreneurial books began selling like hotcakes, Simon Sinek’s ‘Start With Why’ takes a compelling look at what makes organizations work and why it matters who’s leading them. The book holds the same relevance today, as companies are in a race against time to succeed and make a lasting impression in their respective industries.

Sinek contends companies that start with ‘WHY’ rather than ‘WHAT’ or ‘HOW’, are more likely to succeed in the long run. He further says that Apple enjoys a cult following and repeat customers not solely because of the products. People buy their products to challenge the status quo, and for its ‘WHY’.  Although the book picks up pace only by the 3rd chapter and some of the arguments seem to repeat themselves in the later parts, Sinek makes some key points that stand out.

Sinek illustrates this point by talking about different people from different worlds, Samuel Langley and the Wright Brothers. Both had their minds set on the same goal. However, only one of them was able to achieve success. Langley had every perceived ingredient for success: he was a senior at the Smithsonian Institute and had previously worked at Harvard. He had access to some of the most powerful men in government and business, and to top it all, he had received a $50,000 grant from the War Department for his project and had the best minds at his disposal.

Compare this to Wilbur and Orville Wright, who had no funding for their venture or government grants or highly qualified people on their team, and worked out of a bicycle shop. Eventually, only the Wright Brothers saw triumph. Sinek argues that the Wright brothers succeeded because they were highly motivated and had a strong work ethic, more importantly, they were able to inspire the team around them and develop something that could change the world. They started with ‘WHY’ and succeeded even without a recipe for success like Langley.

2. Trust is Earned, Not Manufactured Through Checklists

When a company mistreats its employees, it reflects in their behaviour towards customers. Sinek takes the example of Continental Airlines, that earned the reputation of being the worst airline in the 1980s, to drive the point home. Gordon Bethune, who took over the company in 1994, had remarked that the place was crummy, the employees mistreated each other and the customers and were ashamed of their company. Something was fundamentally wrong with Continental.

Before Bethune took over, the company had already lost $600 million. He turned the place around by gaining in the department of trust. He created value among employees by putting them first and by demonstrating shared values and beliefs. It was the one ingredient that wasn’t measurable, Sinek says, but the thing that was responsible for Continental’s success in the following years.

3. The Difference Between Leaders and Those Who Lead

Sinek points out, “Leading is not the same as being the leader.”  Before Bethune took over from Frank Lorenzo as the CEO of Continental. While both had distinct management styles, it was Bethune’s leading that transformed the company. It was because he had the group’s best interests at heart.

Bethune changed the culture of Continental by giving the employees something to believe in and putting them first. He made himself accessible and had an open-door policy. He gave out bonuses to employees to make sure the airline was running on time. If Continental won, the employees won, and this made them feel that they were part of the success. Bethune was good at leading, and this set him apart from the previous leaders managing Continental.

4. Innovation is Not The Same As Novelty

Companies that make the most impact in their industries don’t confuse innovation with novelty, according to Sinek. Motorola that introduced Razr saw considerable success after its release, but since other phone companies could easily replicate the features later, it couldn’t sustain the momentum. The mistake Motorola made, Sinek says was confusing great features with innovation. An innovation is industry-altering, while features are not, he argues.

He also points to the fact that Colgate, has confused the two, and offers thirty-two types of toothpaste today, which is a novelty but not innovation. It has only made it more difficult for consumers to decide what toothpaste to choose. Other companies can follow suit and make as many variants as Colgate at the same price. He argues that this isn’t innovation and that real innovation changes the course of industry and society, like the fax machine, the microwave oven, and iTunes.

Sinek’s reasons for why hiring the best people for your organization may not guarantee success is simple: hiring people with a great resume or work ethic may not mean much if their values and purpose don’t align with yours. He argues that employees who are passionate about the WHY, purpose, cause or belief, as well as the attitude that fits your culture can drive success.

Skill-sets and experience must be secondary because unless the employee can’t connect with the company on a deeper level, they may not be motivated to do their best work. Sinek says that the difference between great companies and the rest is that they don’t hire skilled people and motivate them, but hire motivated people and inspire them.

A common theme that runs throughout the book is the ‘Power of Why’. Sinek wants to be clear about one thing, that leaders with purpose lead better, companies with a purpose do better, and employees with purpose perform better. It is the ‘WHY’ that he refers to in the book.

He also alludes to the HOW and WHAT, but for that, reading the book is recommended. ‘Start With Why’ by Simon Sinek may prove to be a staple for every entrepreneur, it’s basic, but it works.

Con: Starts slow, and some examples are repeated through chapters.

You can buy the book here